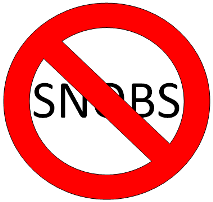 Are You a Sourcing Snob?

Ask yourself these questions:

I continue to see well respected thought leaders in the staffing industry make claims that the quality of candidates on the job boards is low, and there seems to be no shortage of those in the recruiting and staffing industry who are happy to jump on that bandwagon. However, whenever I read or hear broad, sweeping statements claiming that an entire population of 50,000,000+ candidates is low quality just because they happen to be in an online resume database of a major job board – my response is a mix of shock and disappointment.

Broad statements such as “the job boards have low quality candidates” reeks of stereotyping.  A stereotype is an oversimplified conception or opinion based on the assumption that there are attributes that members of the “other group” (in this case, job board candidates) have in common. Stereotypes are often formed by an Illusory correlation , a false perception of an association between two variables where in fact none exists.

You just can’t go around claiming all job board candidates are bad. That’s like saying everyone in New York is rude, or that everyone in California is a hippie. To stereotype all job board candidates as low quality is downright insulting to the many fantastic people who make the decision to post their resume to well known online resume databases. If they only knew that posting their resume to a job board was equivalent to moving to “the wrong side of the tracks.”

Many sourcers and recruiters use the Internet to source and identify candidates all the time, yet there is never a mention of the intrinsic “quality” of candidates who happen to post their resume on their own websites. As if creating a website and posting your resume to it somehow makes you a better person than someone who either doesn’t know how do do that or simply doesn’t care to, instead opting to post their resume to a well known job board site.

And what about Social Media? The last time I checked – there is no “candidate quality filter” built in to LinkedIn, Facebook, Twitter, or any social network. ANYONE can decide to create a web page or a Social Media profile, from “A” players to “F” players.

So what’s with the stigma of being a “job board candidate?” I think it’s sourcing snobbery.

Why Do People Post Their Resume on Job Boards?

If you think that the only reason people post their resumes to online job board resume databases is because they are “desperate” and unemployed, you’re wrong. Many people see the job boards as an online marketplace, not unlike eBay.

Let’s use an analogy to drive this point home. If you’ve cleaned out your garage, basement, or attic and you’re looking to sell some stuff – you could have a yard sale, but yard sales limit your potential buyers to your neighbordhood and nearby areas. Why not dramatically increase the pool of potential buyers by putting the items on eBay?

There is nothing intrinsically wrong with candidates using job boards as one approach to helping them make the next step in their career. The idea that candidates should not leverage job boards in their efforts to find their next career opportunity is like thinking that you shouldn’t shop online, sell things on eBay, or use Match.com. This is the 21st century – by all means everyone should leverage all available Internet options in all endeavors!

Looking vs. Being Found

If a candidate relies solely on searching job postings online, they are being proactive in seeking employment, but they are 100% dependent upon the reactive response of the firms they reply to. And let’s be honest here – most companies aren’t very good at responding to candidates who apply to their job postings. Too many candidates experience the “black hole” effect when they respond to job postings (auto-responders don’t count here – they’re no better than auto-DM’s on Twitter).

This lack of response leads many candidates to seek to take more control over the process by opting to post their resume into a resume database so they can be actively found and pursued by potential employers – kind of like posting something on eBay so that people looking for that thing can find it and attempt to acquire it. Many candidates pursue both paths, thinking they’ll cover both angles.

You have to be aware that some people have not had to switch jobs in the past 5-10 years, and that most candidates are not professional job seekers. When the time comes for these folks to move on in their career – many seek the job boards simply in response to the effective and ubiquitous advertisements of the major job boards. Instead of going to the employment section of the local newspaper – going online is perceived as the “new” way of finding a job as compared to the last time they may have had a career transition.

Why not let 100’s of recruiters try and find you the best opportunity for free? Aside from the experience they may have with poor recruiters, this is not a bad value proposition. Also – this is essentially the same value proposition of posting a resume on the Internet or updating a LinkedIn profile with a complete work history.

But What About Networking?

Networking to find a job can definitely work and I would never discourage or disparage it. However, there is no guarantee that any given person’s network can provide the ideal job opportunity at the right time.  What’s the proabability?

Limiting your job search efforts to only your “network” would be similar to looking to get married to someone, but only on the condition that it must be to someone that your friends know. As if your soulmate can’t be someone outside of your “network.”

All Sourcers/Recruiters are NOT Created Equal

Perhaps some of the stigma attached to job board candidates is based in the belief that candidates in job board resume databases are “easy” to find. As if the challenge and drugery associated with sifting through large volumes of garbage results while performing Internet searches somehow will produce a higher quality candidate.  Also, there’s nothing inherently “easy” about quickly finding the best possible candidate among 20,000,000 others. All sourcers/recruiters are NOT created equal.

I love to challenge those who assume that just because 100 recruiters may have access to the same source (say Monster, for example) that they can all find the same candidates, as well as all of the best candidates available in the system.

Nothing could be farther from the truth. That’s no different than thinking that if 100 people go fishing in the Pacific Ocean that they will all catch the same fish and all of the available fish to be caught. Ridiculous!

Unlike many who disparage the job boards, I have actually used them to source candidates, and I’ve recruited and placed many “A+” candidates from the job boards that my clients and competitors also had access to. By “A+” I mean candidates that were better than those produced through client/employee referrals. Blasphemy? No – just the facts.

How is it that no one else found the same people I did? Did I get lucky? Only if you can get “lucky” consistenly. Just because many people have access to a given database, it is not safe to assume that everyone can find the same candidates, or find ALL of the qualified candidates, or find the BEST candidates in that database. Perhaps the people who are always claiming the job board resume databases have low quality candidates lack the proficiency to actually FIND the high quality candidates.

For a look into how 1 person can find great candidates that 100’s of other recruiters did not using the exact same job board database, read this post about a Google Network Performance Tester position that literally hundreds of agency and contract recruiters had been working for 4 months.

However, as I have hopefully shown you, having access to a resource and being able to find the right people are two completely different things.

The bottom line is that it really doesn’t matter where you find a great candidate.

Don’t be a sourcing snob.