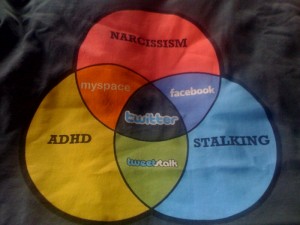 There are over 500 million Twitter accounts with over 200 million represent active users globally. I’d say that qualifies it as a solid source for finding and engaging talent for recruitment.

Of course, you can’t engage someone you haven’t found in the first place, and it’s been far too long since I’ve posted an update to how to search Twitter to find people – can you believe it’s been 4 years?!?

It was just the other day that I was hacking around on Google and Bing trying to find people on Twitter based on the text in their bio’s (yes, I am familiar with Follwerwonk – you’ll see why I prefer Google/Bing in a moment) and while I was getting some results, I wasn’t getting as many as I thought I should, nor were the results as “clean” as I would like.

That led me to a few minutes of tinkering with Bing and Google and I made a few discoveries with some simple pattern recognition that I would like to share that will help you quickly find your target talent pool on Twitter.

I use two main examples – mechanical engineers in South Africa and software engineers in Chicago – you can of course fork my Boolean strings to suit your specific sourcing needs replacing my titles and locations with yours.

While I do search for what people tweet about, I prefer to search for information contained in Twitter bio’s/profile summaries where people often identify themselves by what they do for a living (e.g., software engineering, accounting, etc.).

I noticed that Twitter profiles all mentioned “followers,” “tweets” and “following.”

I simply added “tweets” to a basic X-Ray search of Twitter and a little bit of magic happened. For example: site:twitter.com tweets “south africa” “mechanical engineer” 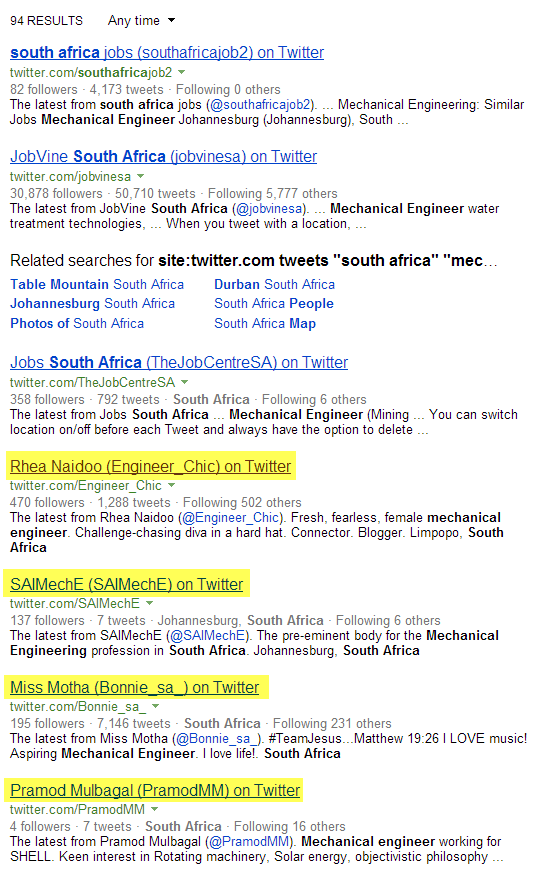 Here is an example of a positive hit in the search results: 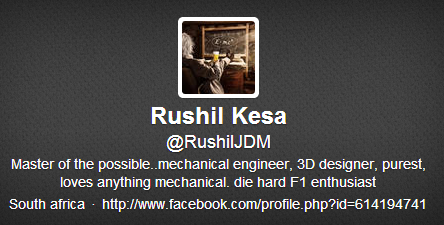 Getting back to the Bing search results – you probably noticed the top 3 results were for “jobs” accounts.

I tried adding a simple -jobs to the string and for some reason it kills the search and returns 0 results.

Then I noticed that many of the job posting accounts have “jobs” in the title lines, so I simply added -intitle:jobs to the string.

As you can see below, only 1 job posting account was able to sneak in – the rest are profiles of people. 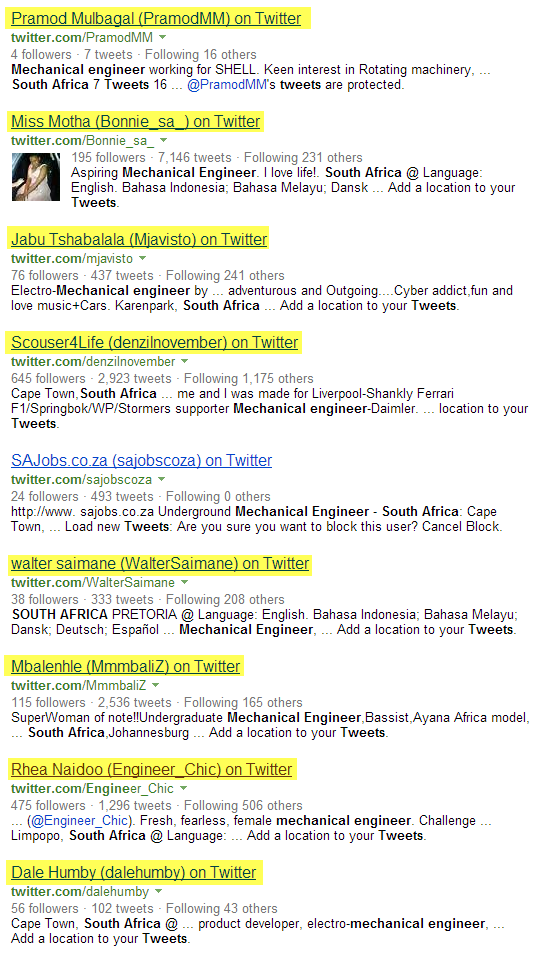 Simply overlooking the job spewing Twitter profiles is easy – I often advise people that an acceptable percentage of false positives is fine with any search. Trying to “over cleanse” results can have undesired consequences, such as eliminating valid results.

Always remember – every search you run both includes AND excludes qualified people/desired results.  Think before you tweak!

So how many results would Follerwonk return in a Twitter bio search for mechanical engineers in South Africa? 51 vs 88 for Bing. 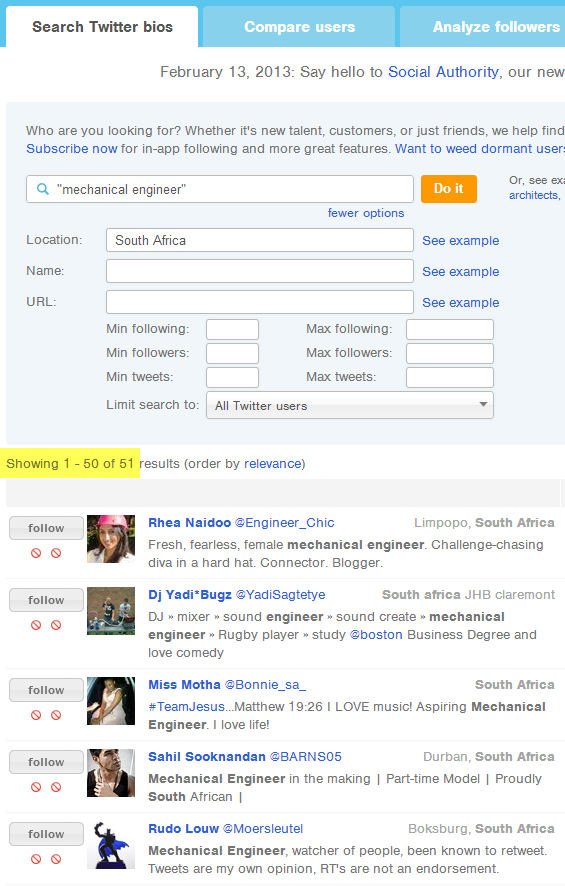 This confirms my concern with any search app/service like Followerwonk – they simply don’t index as many Twitter profiles as the major search engines such as Bing or Google.

Feeling pretty good about what I had found using Bing to find mechanical engineers in South Africa, I tried searching for software engineers in a large U.S. city.

As you can see, 6 out of 12 of the first page results are people, and most of the other Twitter accounts are for actual companies, not just job spamming accounts. 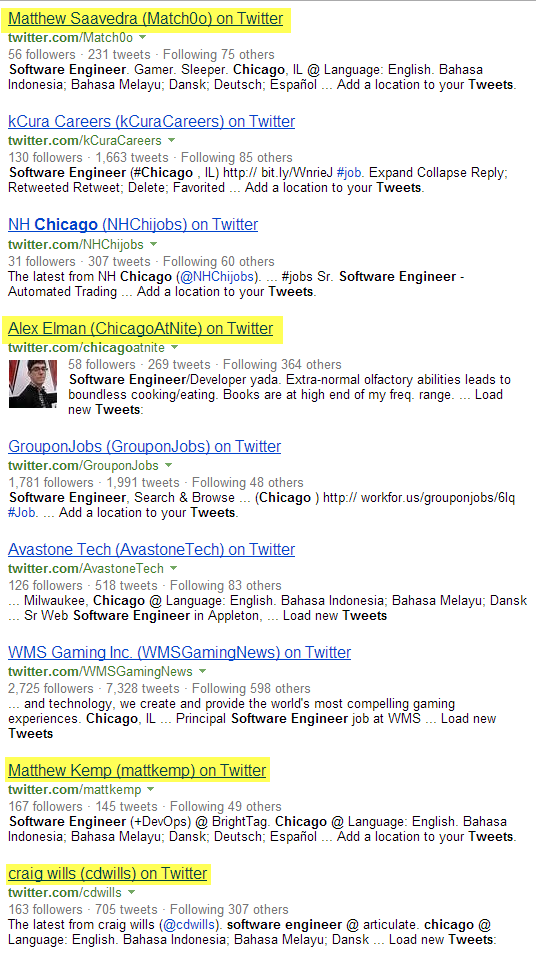 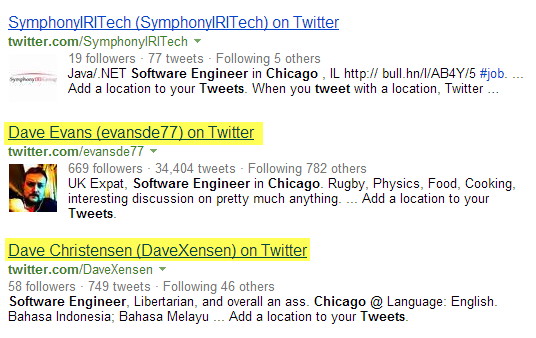 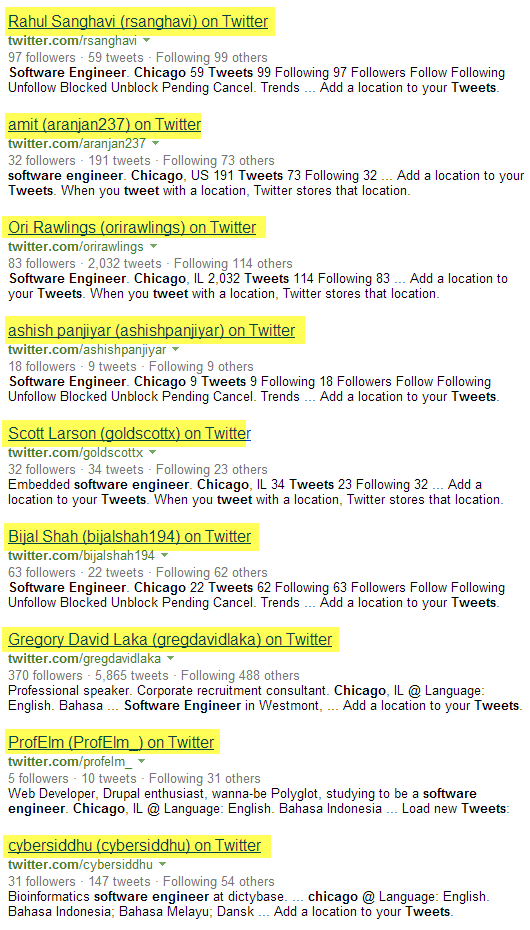 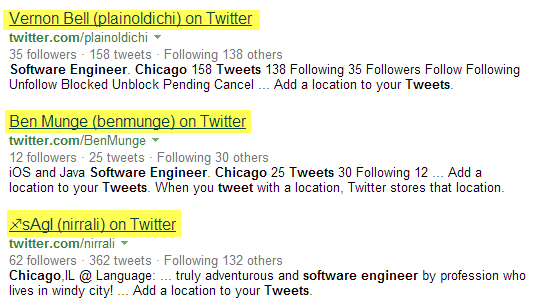 When I switched over to Google, I tried the same search I used on Bing:

I find it interesting to see the differences between Google and Bing, especially when it comes to such a simple search! 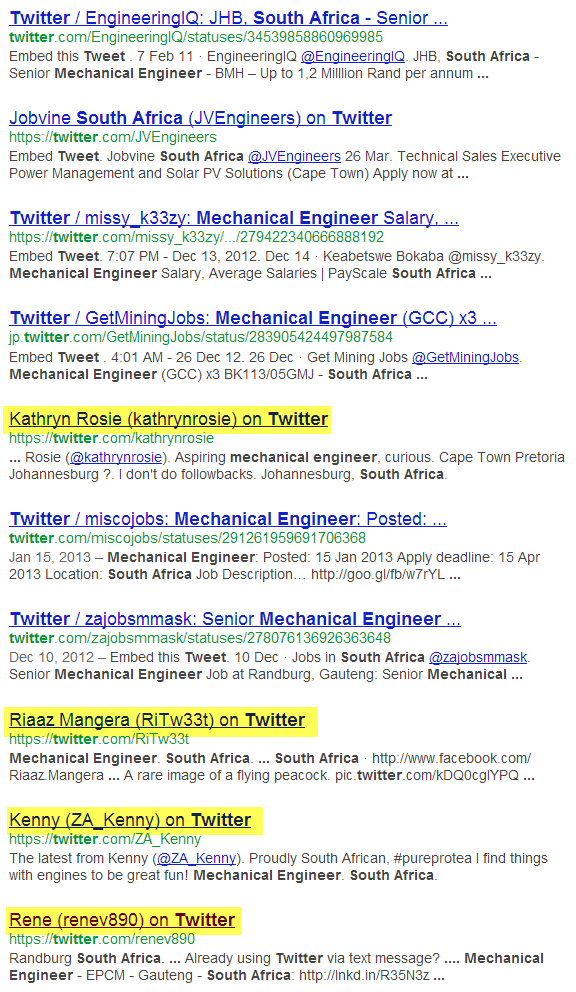 I’ve been trying to tell people for years that Bing is a bit “cleaner” than Google with regard to searching sites like LinkedIn and Twitter. The results above offer further evidence to support my claim.

Anyhow, I looked at the results and noticed a pattern in the false positives (job spewing/non-people Twitter accounts) – most mentioned “status” or “statuses,” so I decided to exclude those terms from the URL’s. 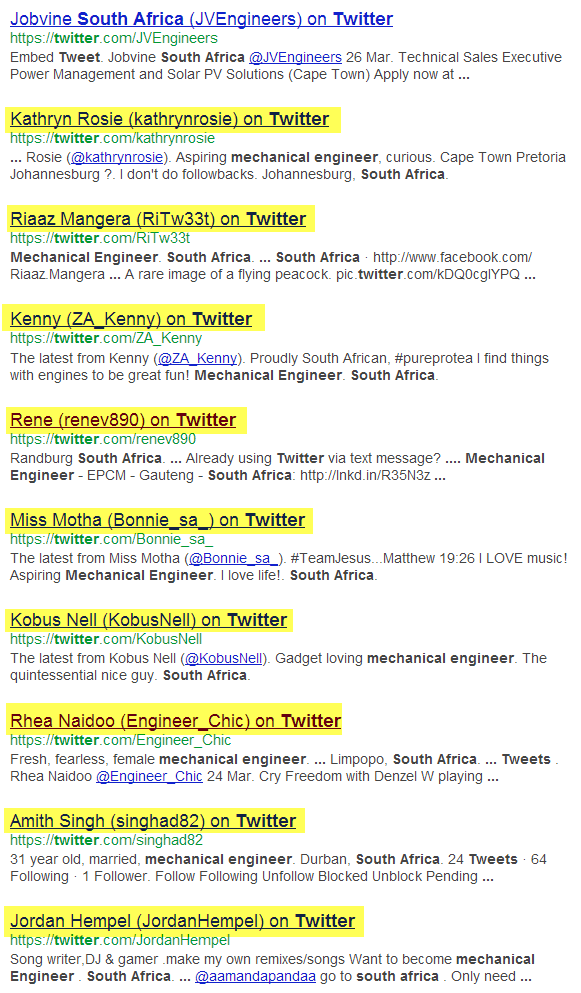 Moving on to the search for software engineers in Chicago, I went a little crazier and added a number of additional exclusions, as is often necessary with Google: site:twitter.com tweets “Chicago” “software engineer” -inurl:(search|favorites|status|statuses|jobs) -intitle:(job|jobs) -recruiter -HR -careers -job Only 1 sneaky job posting account was able to slip past this search: 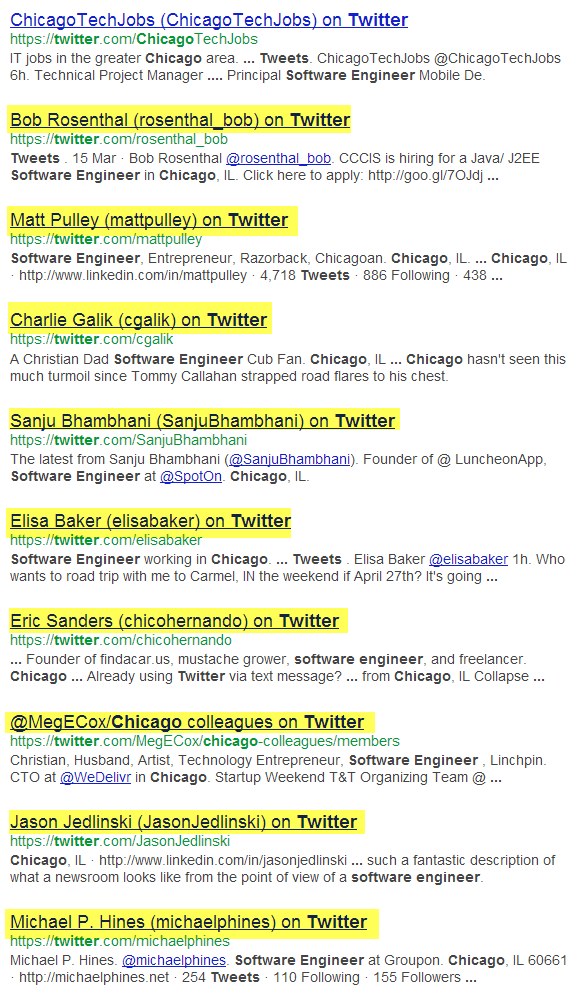 As you can see, Twitter search services like Followerwonk do a good job of making it easy to search for and find people on Twitter, but they don’t index as many Twitter profiles as the major search engines such as Google or Bing.

As such, if you’re only using Followerwonk or similar sites to find people on Twitter, you’re only finding some people – and certainly not all of the people that are actually on Twitter.

Also, when it comes to any information retrieval exercise, a little bit of pattern recognition goes a long way.

Hopefully I’ve provided you with at least a couple of new ways to search Twitter via Google and Bing to find people with specific skills/titles in your target locations while reducing false positive results. Grab these bits of Boolean and add your location and title/skills:

Of course, you should always be careful when searching social media/networking sites – especially Twitter. People can and do use non-standard terms to describe themselves and their locations. For example, here’s a project manager in “Chitown” that you can’t find by searching for “Chicago:”

Also, we’re lucky that this person took the time to explain what a “code sensei” is – if they didn’t make mention of “software engineer,” no one could find this person by searching for that title:

Imagine how many people describe themselves and their locations with non-standard terminology and you have a glimpse into the hidden talent pool waiting for you to explore on Twitter, Google Plus and other social networking sites.