There have been numerous articles written about fake LinkedIn profiles, and some are really easy to spot because their names aren’t even names. Then there are LinkedIn profiles with names that appear real but the profiles are obviously fake. 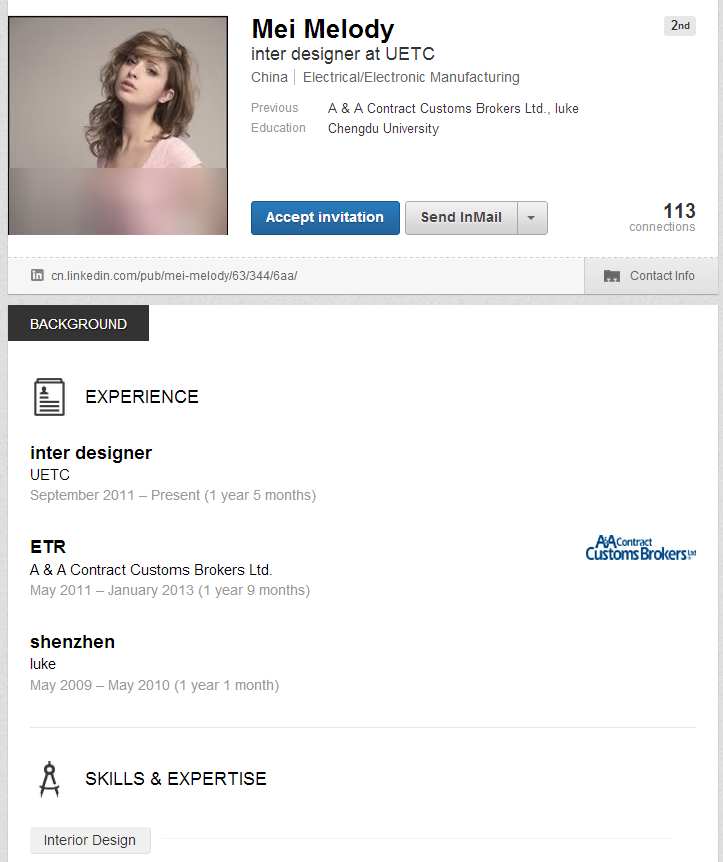 This profile actually has some endorsements. I’m pretty sure this is a picture is of Sophie Turner, who plays Sansa Stark in Game of Thrones (I’m really looking forward to season 3!) Next we have LinkedIn profiles that look like real people, at least when it comes to the profile details, but the profiles are likely created by recruiters and perhaps even hiring managers (yes – this happens…stay tuned for a future post on this subject), and the photo is obviously not the photo of the person who created the profile.

And finally, there are LinkedIn profiles that are likely to be real people – where the details of the profile accurately reflect the person behind the profile – but the profile picture isn’t real.

I refer to these profiles as LinkedIn Catfish.

Have you seen the film Catfish or the MTV series based on the film?

The movie is a documentary about the evolution of Nev Schulman’s online relationship with a girl on Facebook who ultimately ends up not being who she was pretending to be online. The television show follows the same format, finding people who are in online relationships with people they’ve never met, performing research on the people, and arranging an in-person meeting to determine if the people are really who they are portraying themselves to be on Facebook.

One of the techniques that Nev Schulman consistently uses on the television show to determine whether or not the people are lying about who they are is Google Image Search in conjunction with Facebook photos.

How do I know?

From time to time I use Google Images to check LinkedIn profile photos of the people that are sending me invitations to connect as well as some of the profiles that LinkedIn claims are “people I may know.”

I thought I would share some of my findings with you, starting with some obviously fake LinkedIn profiles and progressing to some that I believe are in fact real people who just happen to be using someone else’s image for their LinkedIn profile image.

Let’s start with something I found the other day when I glanced down to the “People you may know” section on LinkedIn. When I clicked on Lola’s profile, I found it devoid of any content, which of course immediately makes it suspect. Where it gets interesting is when you perform a Google Image Search for that photo – multiple Facebook hits: Now let’s take a look at a few LinkedIn profiles of “developers” that I think are really fake profiles created by recruiters. If you try searching for Alison Cork using the first name and last name fields in LinkedIn, this profile doesn’t appear to exist anymore.

Taking a look at the “People also viewed” list on the right side of “Alison Cork’s” no-longer-existing profile, I spotted Elizabeth Rose, a “developer at Chevron,” and Danielle Baker, a “web developer at Pfizer.” If you click the link to “Elizabeth’s” profile, you’ll see that at least the details all seem to align (date of graduation, data of first work experience, location of school and current location, etc.) – someone took at least a little effort to make this profile seem like a real developer. However, I believe this profile is really the creation of a recruiter looking to use the profile to connect with other developers.

“Danielle” below is a similar example. If you click the link for this profile, it’s similar to “Elizabeth’s” in terms of being relatively well filled out/detailed.

Performing a Google Images search for “Danielle,” this is what you’ll find: Now I’d like to move on to the category of people who *could” be the people with the experience listed on the profile, but they are using someone else’s picture for their LinkedIn profile photo.

For example – this person came up on LinkedIn as someone I might know.

I blurred the details because this *could* in fact be a real person, and on top of that – they seem to work in sourcing/recruiting. The profile mentions they have worked in recruiting leadership roles at some very prestigious companies, and they have given one (definitely real) person at one of those companies a recommendation (but haven’t received any).  If you’re extremely curious and a tad bit technically savvy, you can probably find this profile – it is public.

When I performed a Google Image search for the profile picture, here’s what is returned: So what do you think – is this profile of a real person?

Why the term “Catfish?”

Apparently (at least according to Internet and other lore), the use of the term “catfish” comes from the story about the early days of shipping live cod, where the fish’s inactivity in their tanks during shipment resulted in fish with a mushy texture and bland taste. Someone had the idea to ship the cod with some catfish in the tank, because catfish often conflict with cod in the wild, so during shipment, the catfish would harass the cod and keep them active, resulting in cod with the proper texture and taste, as if they were caught fresh. In the movie, one of the characters theorizes that the person Nev thought he was having a relationship with was like a “catfish” – serving to keep him active, always on his toes, and always thinking.

When you’re on the Internet – even on professional networking sites such as LinkedIn, you always have to be on your toes. Some of the people you’re finding and connecting with may not be who they appear to be, and they might not be real people.

Even so, you may want to connect with some of these folks anyway (as I do in some cases).

If you fully appreciate and understand the X-degrees of separation concept, there is value in connecting with the “wrong” people because they can actually be conduits to the “right” people. In fact, it could be argued that in many cases, the *only* way to add some of the “right” people you’d like to have in your network  is to connect with the people who are connected with them – even the ones that don’t seem to make sense on the surface.

If you connect directly with a “catfish” profile has been created by a recruiter or hiring manager specifically to connect with software engineers, and they have been successful in connecting to many of them at the 1st degree, then those software engineers would be in your 2nd degree network on LinkedIn. With a free account, you’d be able to see their full names in any people search.

Also, as a 1st degree connection, you have the option to search their connections if they haven’t shut that down (the 2 “developers” above haven’t), and you also have access to their contact details – so if you’re really curious, you could ask them directly about the reality of their profile.